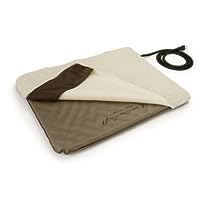 Availability: Usually ships in 24 hours Ships from and sold by Amazon.com
Product Description
The Lectro-Soft cover is a great way to add comfort to your Lectro-Soft Outdoor Heated Pet Bed. The faux fleece is soft and very pleasing to any dog or cat. These covers are removable and machine washable. The Lectro-Soft Covers fit our Lectro-Soft Heated Pet Beds securely and are easy to remove for washing.
Product Details
Product Features
Customer Reviews

Perfect
By Kimberly A. Rice
I bought this to use indoor for an old cat that lives in my cold finished basement. I ordered a cover for it because I didn't realize it came with one, but that works out good because when I need to wash the cover (which is often because kitty gets sick a lot) I can put a clean one on right away. I bought the 14 x 18 which is the perfect size for the kitty. The box says it uses 20 watts of electricity and I believe the advertisement of the product says 14 watts. Either way it is less expensive than keeping the electric radiator plugged in to heat the entire room. Kitty loved it immediately and cuddled up on it as soon as I put it on the floor and plugged it in. It doesn't feel super warm to touch, but I can feel the warmth on the kitty when he has been on it. It works for what I needed it for.

So thin and not durable
By susan
This material is so very thin. The morning after my dog slept on it there was already a hole from where my dog scraped with his nails. And I mean the NEXT Day and it was a hole about 2x4. also the pad does not stay on the heating pad. this is the second one I bought. Shame on me. The company that makes the heating pad cautions about using something other than that on its pad so thats why I thought i would try it again. Wast of money

Dogs don't use it, but seems decent
By kparrent
I'm pretty neutral on this. It seemed like it was going to be a great idea. I have two dogs and one of them has Addison's Disease which causes him to shiver from time to time due to imbalances and trouble maintaining body heat. I thought this would be a great way to keep him warm when I wasn't around. I keep it inside on my bedroom floor where they spend most of their time, but neither one of them is really interested in it. They'd rather go lay on a blanket. When I run my hands over it with a little pressure I can feel the heating elements so it may not be comfortable. It seems well made, although the cover slips off quite frequently. It would work better if it went around the entire thing and had a zipper or velcro. 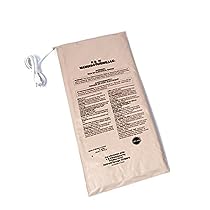 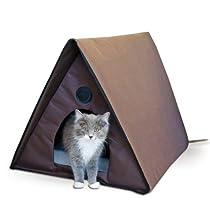