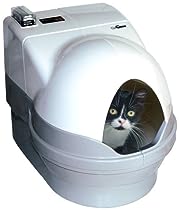 Availability: Usually ships in 1-2 business days Ships from and sold by CatGenie
Product Description
GenieDome. Gives cats who crave total privacy their wish. The snowy white Dome tops the pearl gray rim that securely nests on to the CatGenie Base. The GenieDome is made of 4 removable sections (2 side walls and 2 dome halves). This product allows you more options to satisfy your cats' needs. The top of the Dome is 19.5" from the floor. With its Dome, the CatGenie is not as tall as the back of the unit.
Product Details
Product Features
Customer Reviews

Performs, but with major shortcomings.
By Ken Jobsky
I have a deeply set love-hate relationship with this product. On one hand it does exactly what it says it will do - clean cat crap so I don't have to. On the other hand there is a long list of significant problems that a better design could have eliminated.

1. I never have to touch cat litter - and this is a big, big pro. All the cons would outweigh the value of this product, but I really don't have dirty cat litter in my life any more and I love that.
2. Easy cat acclimation. I simply set up the CG in the mud room where the old litter box was located, put each cat in the CG to show them where it was, and then let the old litter box get dirty for a day. Then I turned the door of the old cat box toward the wall so it was a little more difficult to access and all the cats went straight for the CG. I took the old box out and never looked back.
3. Great customer service. The first unit they sent was defective (wouldn't program into different auto modes). I called CS and was talking to a human within a minute. After 10 minutes of trouble shooting with an intelligent English speaker he agreed to FedEx a new control unit complete with a postage paid return shipping label for the defective unit. Two days later I was up and running again. It really could not have been easier.

1. Cat litter - within 36 hrs we found the little plastic litter bits in every room in the house. They are made of a light plastic, I'm guessing the polypropylene plastic pellets used as a raw material for manufacturing the plastic crap we all buy - I doubt they are specifically designed for this application. These light plastic bits stick to the cat's feet and get tracked everywhere. They also stick to the rake the CG uses to clean the litter (as well as kitty poop) and get washed down the drain. They sell them in a small cereal-size box for $24/box - an incredible markup I'm sure. I have to replenish the litter at a rate of about 1 box every 5-6 weeks.
2. The cat sensor mode was a no-go for 3 cats. The fact that each cycle takes about 30 min means that it is often in washing cycle when the cat wants to do its business, so our cats found an alternative spot behind the washing machine. Now it's set to 3x/day and all is good.
4. Expense.... and this is a big one. The up-front cost is obvious, but I didn't anticipate the ongoing cost. The marketing department of this company definitely makes some of the engineering decisions. I'm running the clean cycle 3x/day so a cleaning cartridge will last about 1 month - that's $26/month for Sanisolution Smart Cartridges from Amazon. Running in cat-sensor mode would help (each cycle uses only half the amount of cleaning fluid in cat-sensor mode) but that doesn't work in my situation (see #2). The part I didn't anticipate was the cost of the litter. At $24/box I'm using about a little less than 1 box/month, that's about $20/month in litter for a system that's advertised to eliminate the need to buy cat litter! Plan to spend about $46/month (a little less if you have fewer cats) on supplies.
5. Stink - every once in a while the washing cycle doesn't get all the cat crap out of the litter and the drying cycle (essentially a blow dryer concentrated on the litter) bakes the left overs to a stink that is nothing short of amazing. It will drive an adult to tears and make you want to leave the house. The scented washing fluid only makes it worse by mixing the foul smell with perfume.
6. The human interface is annoying. It's one of those "push the button 3 times and hold it for 3 seconds on the fourth push" kind of deals. At this price point I want an LED screen that speaks english.
7. About every three months you have to get out the rubber gloves, dismantle the whole thing, and clean it. This isn't that big of deal and it goes under regular maintenance that you have on everything else in our lives, but it should be listed here.
8. The unit just doesn't feel like it will last. It has alarming creeks and pops when it washes and the plastic gears and cogs seem flimsy. It's gone about a year without a major mechanical breakdown but I'd be absolutely amazed if it goes three years.

The bottom line and why I'm giving this product 3 stars is that I'd buy another one - not because it's such a fantastic product. I'd buy another one because the problem it solves - cleaning cat crap with a hand-scoop - is a big one and that makes me willing to live with its shortcomings. It actually does what it's advertised to do. But if a better looking product shows up then I'd throw this system out with yesterday's cat crap.

This unit has been wonderful until I did the first maintenance cleaning
By HeatherM
This unit has been wonderful until I did the first maintenance cleaning. I was having zero issues with it and then decided to do the recommended maintenance cleaning with the special cartridge for it. The very next day there was a clog in it and I had to disassemble the entire unit which was not fun. Now in the company's defense, there was a lot of fur and a piece of fabric around the macerator but I have to think the timing was just too coincidental. The machine has clogged two other times since then. Although it is a huge pain in the a#$ to unclog it, the money I have saved not boarding my cats when I have to leave for a while has more than paid for the unit at this point. But I have to say I am hesitant leaving them for extended periods of time now and not have someone come in to check to make sure it isn't clogged and make sure I leave them the old style litter box to use if needed just in case it is. You probably don't save money on not buying litter but the time not cleaning it out twice a day or more with two cats has to count for something. I strongly recommend buying the large anti track mat to go in front of the box. The granules do come out a lot. I sweep them up once every few days and dump back in machine. By doing that I have to add a box of granules once every 6 weeks or so which is about $25 per time. Probably cheaper than litter now that I think about it.

Helps prevent litter from getting out
By Paul & Carroll
We love it. But there is an issue know one mentioned or we missed it when we did our research when we bought our Catgenie. The litter gets everywhere.
Within a month we had to buy another box of litter to refill the unit because the cats had it all over the floor. When we ordered the litter we also bought the side extensions thinking raising it up would help and we also bought a conditioner that was supposed to help prevent the litter from sticking to the cats paws. It somewhat worked but we still had to buy more litter after two months and this time we bought the dome. The dome came with the same side extensions we all ready ordered. The dome did help but we still have to refill the litter but not as often without it.