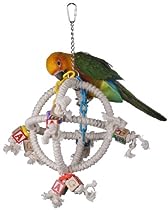 Availability: Usually ships in 24 hours Ships from and sold by Amazon.com
Product Description
The Orbiter consists of a sturdy steel frame wrapped with soft 100% cotton rope. Wooden blocks, plastic chains and rings are added to keep your birds playing and hanging out for hours.
Product Details
Product Features
Customer Reviews

and after spending the first week acting like it was going to eat them
By Glass Cat
I have 5 cockatiels in one flight cage where I put this, and after spending the first week acting like it was going to eat them, they all decided that they just love it. I am so glad I got this for them!! This can hold up to 4 'tiels on it at one time, which means that at any given time one is squawking and pecking at the closest bird, trying to usurp it's place on the Orbiter. They even chew on the blocks a little, which was surprising to me because I thought that the blocks were a little too big to be interesting to them. It's a pretty well built product, too, a good value for the $16 I spent on it! The only thing I would do differently is buy the large size so they could fit inside of it. Apparently I bought a "small-medium" one, and there is a large available, which I WOULD have known had I actually read all the words at the top of the page, instead of just looking at the picture and reading the reviews, and then buying it, like I do EVERY time, lol!

Got this toy to make a playstand more interesting...
By J. Ward
...and it worked! I have a little maroon-bellied conure who's intimidated by larger toys that sometimes say they're intended for "conure sized birds". I think they usually mean sun conure - or larger - size. This toy is right for his size (about 60 grams) and he likes to play in it and around it and climb through it. We also tied some "birdy kabobs" onto it in a couple of places and a bell we had from another toy he destroyed - and he loves it all the more. The plastic links that hang down the middle are surprisingly fascinating to him. This makes his playstand more interesting and acrobatic. He doesn't preen the ropey bits, but he doesn't really use preening toys as a rule so that doesn't mean your bird won't. I would highly recommend this toy for a bird of his species and curiosity!

Fun for Small Conures!
By Jenny Bee
This is a very well-made swing, perfect for green cheek conures or similar sized birds. However, I think it would be too small for a Sun or Jenday, as the picture indicates. I originally purchased this for our older gcc, who DOES NOT like it at all (she is very skeptical of new things/situations)! I gave up after a few weeks of hanging it on the outside of her cage... BUT, our new, younger green cheek LOVES it! I'd forgotten about it and came across it in the cabinet last week. She is very adventurous and brave, so I figured "What the heck" and just hung it in her cage. She was immediately curious and jumped right in!!! She's been sleeping in it every night since! Like everything, it just depends on the personality of the individual bird. 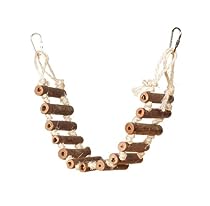