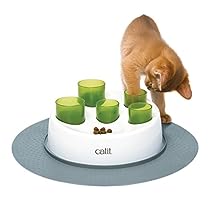 Availability: Usually ships in 2-3 business days Ships from and sold by Petco
Product Description
The Catit Senses 2.0 Digger encourages cats to work for their food/treats in a fun and natural manner. As cats are true hunters, they need to be able to search and locate food in different locations around the house. The Senses 2.0 Digger incorporates this idea as part of the Senses 2.0 vision, with a smart design that activates your cat's natural pawing behavior during playtime. Hiding kibble or treats in the Digger's multiple tubes plays on a cat's instincts to sniff and paw out smaller portions of food, which stimulates activity and reduces binge eating. The Senses 2.0 Digger includes 3 short, narrow tubes, 2 long, wide tubes, a stable base and a rubber mat to lock the product in place. The tubes have rounded ends, making them easy to use and clean. To keep your cat interested, you need to change their toy set-up often. Catit Senses 2.0 is the only cat toy series that allows you to create new and exciting setups for your cat, quickly and easily! Each toy was designed to activate and stimulate your cat's unique senses, all in one fresh, green style to match any home interior, no matter the arrangement. The Senses 2.0 Digger is great individually or in combination with other Catit Senses 2.0 products.
Product Details
Product Features
Customer Reviews

Solution for the Morning Blues
By H. Stevens
[[VIDEOID:8d6f61d130c5b042bd766b46512a7235]] I have a cat that vomits in the mornings from eating too fast. She figured out how this feeder worked right away. At first, I didn't know how it worked, so I filled all the tubes up to the top, I thought the feeder would confound her. She immediately emptied the cups, then vomited. So I have to feed her a small amount, divided between the cups, and that solved her morning problems.

The green tubes have closed rounded bottoms, so her claws don't snag, and the white base is smoothly contoured to catch the food when she fishes some out. There is a rubber mat that comes with it, that I suppose is to hold the feeder in place. I am including a video so that you can see how it works.

Adds a little excitement!
By NW Dryad
Life hasn't been much fun for my cat Edward since last year, when the vet confirmed that he is completely blind. So no more fun with feather wands or mousey fish poles, and he's never been much for catnip. But he loves food. I thought this item would be a great toy for him, since it relies on smell and touch. Sure enough, he loves it! And he got the hang of it very quickly, which is something worth mentioning, since he is old and a little senile. The photos were taken as Edward discovered the Digger for the first time. I tried it first without the green tubes so that Edward would get the idea--then, each day I added another green tube, and now life is a blast at treat time every morning and evening. It's worked out so well that I just ordered the Catit Senses Food Tree to give Edward more of a challenge. He is not the type of cat who bolts his food, he just needs something interesting to do, and the Catit Digger certainly brightens his day!

Perfect for my boy...
By A.Wit
[[VIDEOID:84cbd0cf7e7d9673a661272d428aabcd]] This is perfect for my boy. He loves feeding himself anyway. He would rather have the food on the floor or in a scooper so he can get it himself.

I saw this for sale and had to buy it...he loves it and cries when the cups are empty...he's had it for three days. I called him over, dropped some food in the cups and told him to scoop the food out. Zero learning cure. A quick sniff then all hands in. 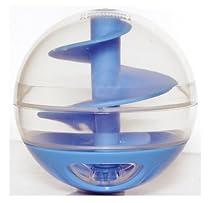 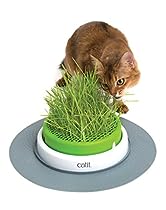