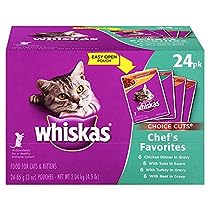 Availability: Usually ships in 24 hours Ships from and sold by Amazon.com
Product Description
Cats need crude protein to stay active and healthy, and WHISKAS CHOICE CUTS Chef's Favorites Variety Pack Wet Cat Food is a protein-rich way to keep them feeling great. Our hearty chunks of chicken, tuna, turkey and beef are nutritionally complete and balanced to help maintain optimal health, and your cat will go crazy for the rich, delicious flavor. With our FLAVOR-LOCK Pouch, CHOICE CUTS Cat Food is easy and convenient to prepare, so your feline friend can enjoy fresh tasting cat food at every meal. Give your cat the nutrition they deserve and the flavors they love with WHISKAS CHOICE CUTS Premium Wet Food for Cats.
Product Details
Product Features
Customer Reviews

Counterfeit cat food??
By Amazon Customer
Note: This review is specifically for this Cat food, sold by Amazon.com in a Pack of 48 pouches. Purchased in February of 2012.

We have an extremely picky cat with health issues who will eat nothing but Whiskas Seafood pouches (not even the other Whiskas pouches). We've purchased this food from a number of different sources but noticed that it cost 50-70% less on Amazon, so we ordered a large quantity. Right as we started feeding our cat the food purchased on Amazon, he suddenly started leaving large amounts of food (which we had to throw away) and losing weight rapidly. We did not initially associate this with the food, and assumed it was a health issue, but could find no evidence of any problem. It was as if the cat suddenly had gone off his food.

Fast forward three weeks or so: We've been feeding our cat Amazon's Whiskas, throwing away half of what he leaves in the bowl, and are still having no luck trying different types of food. Suddenly it occurs to me that his new 'health problem' started when we began giving him the Whiskas pouches from Amazon. So I examine the pouches, and here is what I find:

- The packaging is in every way identical.

- The consistency is much thinner. Where the gravy is thick and clings to the package in Whiskas pouches from Safeway/Petsmart/Petco, the gravy is watery in the Amazon version. This is best described as: The Amazon stuff immediately pours from the package, whereas the stuff from other stores has to be squeezed out and sticks to the side of the pouch.

- Both Amazon and other food had an expiration date that was Jan/Feb/March of 2013, so nothing was expired and they were supposedly all manufactured around the same time.

- Amazon's cat food is mysteriously WAY cheaper than even Petsmart. 50% cheaper. That is a suspiciously huge price difference for a 'grocery store item', even for Amazon's great prices.

So I go to the store, get some more of Safeway's Whiskas Seafood pouches. As soon as I put it in the cat's bowl, he hungrily starts biting into it, as if he hasn't eaten in weeks. (and he barely has!) We finish the box of Safeway Whiskas pouches, and before contacting Amazon, I decide to switch back to the remaining Amazon pouches to see what happens: The cat doesn't eat it. Will not touch it. He won't even lick the gravy off of it, which is normally the first thing he does. I gave him the food this morning, and he hasn't eaten a bite. I let the other cats into his feeding room (they're on dry food but will eat his wet food when they get a chance), and not one of them touches the food.

After the food has sat there completely untouched for about 10 hours, I go to amazon.com to initiate a return. Turns out you're not allowed to return this kind of consumable! However, knowing Amazon's history of being an exceptionally fair and honest company, I contacted customer service, and explained the problem to them. They immediately processed a refund, with full apologies, no need to return the item. (I'm throwing it away)

So thank you Amazon for your outstanding customer service. I greatly appreciate it and will remain a frequent Amazon customer as I have been for 15 years. I've asked your customer service rep to open an investigation to find out if this cat food is counterfeit. I will apparently receive a report about the investigation.

In the meantime I recommend to customers that you do not order the Whiskas Pouches through this page (maybe a different provider through Amazon would be fine). You may risk feeding your animals counterfeit (possibly harmful) food.

Great value...if your cat will eat it
By ccsteve
I have two cats - a male Siamese and a female Maine Coon. We recently had to switch our Siamese over to wet food from the dry kibbles he has eaten for years due to urinary tract crystal formation. He loves the Fancy Feast garden medleys, but the cost was prohibitive, so I was searching for a cheaper alternative. When I saw that the Whiskas variety pouches were one of the cheapest available, I had my doubts but ordered them nonetheless.
My Maine Coon won't touch it, but my Siamese loves it! So I keep buying it for him, and give her something else. He eats it readily and has had no further urinary tract issues. Admittedly, any wet food would have helped that problem, but I am happy that he likes something that is affordable.

Whiskas Choice
By AP
My cats love this cat food. It is the next best thing to their natural food...you know, birds and mice and such. They line up for Whiskas every night. I have tried to substitute another brand of food but they won't have it. 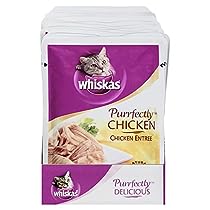