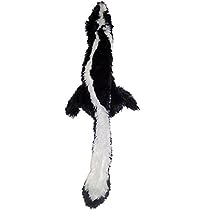 Availability: Usually ships in 2-3 business days Ships from and sold by Stuff4Craft
Product Description
Bring out your dog's natural hunting instinct with our realistic stuffing free skinneeez dog toys. These are some of the hottest toys available for your pet.
Product Details
Product Features
Customer Reviews

Makes a mess but is very tough
By David Lee
I have a 10yr dachshund (wiener dog) and she tore this thing apart! Some may doubt a hotdogs ability to destroy things but they are hunting dogs with a wicked prey instinct.

She went straight for the squeakers (there are 2)and got them out in 20mins. After that it was just general mayhem: the inside 'stuffing' (as seen in photo below) came out, but the overall body of the toy stayed in tact.
All-in-all: she had a good time trying to destroy this skunk, but it's tough and will not rip totally apart...so far.
All-in-all it makes a HUGE mess but dogs will enjoy trying to 'kill' it.

Very flimsy, not worth it
By Frances Gillard
I'm very disappointed at the extremely poor quality and don't feel the description reflects the actual product. I bought this and the fox as Christmas gifts for my two sons' dogs. I would never actually give them as gifts. Glued on eyes and flimsy fur are not mentioned and not worth even the low unit price. I can get this level quality at the local dollar store for much less. Not only would this toy last maybe 5 minutes tops with the dogs, I believe it presents a real health hazard. I would not recommend buying this item or other similar ones in this line.

Ok for the price
By Sandra K. Lee
It's ok for the price but the 14-in description is misleading. It is 14 in if you measure it including the flimsy tail that will probably get ripped off in seconds. The bulk of the toy is really about 12-12.5 inches which is about the smallest you'd want to go for a 35-60 pound dog (which is what I have). The skunk has two squeakers (one at each end) but it does not crinkle. So if your dog likes crinkle toys you might want to try a different animal. However, we also bought the cow (which does crinkle and has one squeaker) and it lasted only 2 minutes before our dog ripped out the squeaker. So between the two, for some reason the skunk is holding up better.

If I bought this again, I would choose a larger size if available.