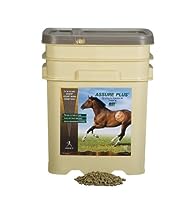 Availability: Usually ships in 1-2 business days Ships from and sold by Arenus Animal Health Products
Product Description
Although your horse may not be living in a sandy area, ingestion of silt and other debris may be prevalent in or around feeding areas. Any horse with pasture or paddock turnout is at risk of sand ingestion which may cause issues and discomfort in your horse’s gastrointestinal tract. ASSURE PLUS is a pelleted sand clearance product incorporating bulk quantities of (No Suggestions) for proper sand and debris clearance. Its unique formulation also provides probiotics, prebiotics, and enzymes to naturally support your horse’s digestive system.
Product Details
Product Features
Customer Reviews

Bought for mule with severe sand colic
By Trish Geer
We bought a mule from AR and had her shipped to CA. Within weeks of getting here she coliced from sand. The vet gave her oil and pysillium by tube. We immediately put her on a pelleted pysillium product. 10 days later another severe colic episode. Vet did same treatment but advised us to try raw pysillium as she thought it worked better than the pelleted products. Then 2 weeks later she coliced again. Vet back out, same treatment. The mule was passing sand, just not enough of it fast enough. So I got on the internet and started researching the best products for sand colic. I came across Assure Plus invented by a vet. Not only did it have the pysillium but it had prebiotics and probiotics as well. I thought it was a bit expensive, but if it saved on vet expenses it would be worth it. I got my shipment in 3 days and started her immediately on it. Within in 2 days we could visually see a major difference in the amount of sand being passed. Way more sand coming out with the Assure Plus than any other pysillium product we had tried. Then my girlfriend decided to do a test. We used 3 clear water bottles and put in 3 tablespoons of sand in each bottle and filled them up to within 1 1/2 inches from the top. Then we put pysillium pellets in one, raw pysillium in the second one and then Assure Plus in the 3rd and shook them all up and let them set over night. The Assure Plus pellets start to dissolve almost immediately. The next day we checked and the results were startling. The other pelleted pysillum product was still in pellets, half sank to the bottom and half were still floating on top. The raw pysillium had half at the bottom stuck to sand and the other half floating at the top. The Assure Plus pellets had all dissolved and was at the bottom stuck to the sand. We then gently poured out the water and separated the pysillium and sand clumps. The pelleted pysillium product did the worst job and removed hardly any sand. Which is why my mule continued to have severe colic episodes even after weeks of having pysillum. The raw pysillium did much better than the pelleted version. But the results from the Assure Plus were unbelievable! It removed at least 4 times the amount of sand that the raw pysillium did. It is pelleted, but they dissolve very quickly and it really sticks to the sand and gets it out. I haven't had a vet call or a severe colic episode since I put her on Assure Plus. And she is passing loads and loads of sand that has been in there a long time. Is it worth the expense, I believe it is. I guess when it comes to pysillium products you get what you pay for. And if you don't believe our little do it at home test, you test your current pysillium product in a bottle or jar with sand and water and see how it fares. You just might be as shocked as we were. I do not work for the company nor do I have any affiliation with it. I'm just a very satisfied customer and I want people who are dealing with sand colic issues to know there is a better product out there for removing lots of sand much faster than the current go to pysillium products. Sincerely, Trish Geer - Tucalota Longears Company

Great product!
By SUE
My vet highly recommended this product and I am very happy with the results! It made a huge difference in the health and well-being of my older pony. He suffers from IBS and he hasn't had a problem since he started this product!

No Sand Colic Yet
By Ashley
Seems to work well. None of them have had colic, but considering they live in sand it seemed like a good idea to do this as preventative measures. Our vet strongly recommended it. 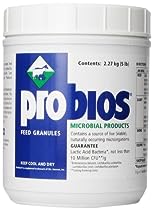