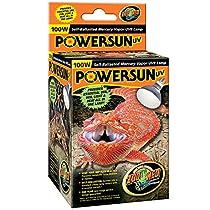 Availability: Usually ships in 1-2 business days Ships from and sold by EntirelyPets
Product Description
The PowerSunâ„¢ UV is a self-ballasted mercury vapor lamp which emits UVA, UVB and heat all in one lamp. Fits into a standard ceramic socket. (No ballast needed.) The 160 Watt projects UVB up to several feet from the lamps surface and is ideal for large terrariums or bird aviaries. Features include quality nickel plated threads to prevent corrosion, and a full one year warranty. Please note movement of the bulb reduces its life. Please make sure a high quality ceramic fixture is used.
Product Details
Product Features
Customer Reviews

Higher numbers are not better
By markb629
These powersuns by zoomed are great bulbs. I have been using them for yrs for all my desert dwellers such as uros, chuckwallas, desert iguanas, bearded dragons, and also for any monitors, tegus, blue tongues, and tortoises. HIGHER NUMBERS ON YOUR UVB METER ARE NOT BETTER FOR YOUR ANIMAL. In all actuality its worse. Too much uvb is bad and can cause eye issues and different forms of "sun poisoning" essentially. Theres a safe zone for uvb numbers, too low and they're useless too high and they become dangerous. UVB output is effected not only by the bulb itself, but also by the type of fixture used, distance to the animals basking spot, and whatever the light is passing through (density of the mesh or screen or nothing at all). A few yrs ago significant testing was done on all different brand uvb bulbs of all styles (tube, coil, mercury vapor) and brands and it was found that most were putting out dangerous levels, especially when used in dome fixtures which actually intensify the beam directing all the light straight down rather than allowing the light to spread out. To correct this all companies reformulated their bulbs for better and safer use. These zoomed bulbs put out as much uvb as the noontime sun in the shade (and yes the suns rays are even in the shade) which is more than fine for constant exposure like in captivity.

Lasted 13 months and still working, ordering another for our Russian Tortoise
By whatwordscannotexpress(dot)weebly(dot)com
I waited until we'd used the product for 13 months before reviewing. We purchased this bulb in July 2013 to use as the heat/uv/light source for a Russian Tortoise enclosure in my son's room. We have it in a standard ceramic socket light fixture from Menards which had a large enough dome we didn't need to spend twice the money on a "deep dome" pet section variety. It has worked great & I am ordering again today. (It's still working, but as product claims to last 1 year & per my veterinarian's recommendation we are switching it to ensure it is still functioning at capacity.) Here is something you should know- if you unplug the cord accidentally or on purpose, you need to wait about 15 minutes before plugging it back in. If you don't wait 15 minutes, it will either not turn on or it will flicker. It explains this in the directions, but not everyone reads those and I expect some of the negative reviews I had read last year were caused by this. We did discover that it was more prone to turn itself off when we had it plugged in the top plugin on our outlet, but moving it to plugging it in in the lower one solved the problem. I expect there was a more steady electric flow with the lower one? Either way, it was easy enough to solve. We've had no complaints at all and are very satisfied to have a single-bulb set up work so well and hold up to what it is advertised to do.

Perfect two and one, but can be some problems with reliability. Still would recommend, just understand the slight risk.
By DMK
Recently we discovered a veiled chameleon in our lanai, our enclosed (except for a doggie door) back porch. The poor thing was not doing well so we took it in, did some quick, extensive research and scrambled to get the things the little guy needed. Later one we found out that an individual was breeding things and was facing impending trouble so they released all of their stock into the wild.

Pros:
Provides both basking and UVB that some reptiles require, in one bulb.

Cons:
As seen in some reviews, this worked great when I first got it, but experienced some problems of it not coming on right away after being turned off, so reliability is sometimes an issue. I did get a replacement and have had no issues thus far.

I would have given five starts but there does seem to be a pattern of the same defect pointing to a possible ongoing issue. Just make sure you keep an eye on it, fill out your warranty, and if you experience an issue with it early on, get with customer service of either reseller or Amazon.