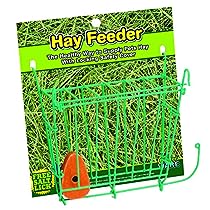 Availability: Usually ships in 24 hours Ships from and sold by Amazon.com
Product Description
Ware Manufacturing's Chew Proof Hay Feeder is the perfect solution for feeding Rabbits, Guinea Pigs and Other Small Pets. This feeder features a all metal design that provides you with the durability to last while being chew proof. Side Hooks make this feeder easy to install on any cage, just simply attach the hooks to the cage wire and can be attached to the inside or outside of the cage. Ware Manufacturing's Chew Proof Hay Feeder also features a snap lock lid that reduces wasted food and helps keep the cage mess free. Measures 8-3/4-inch width by 2-inch depth by 9-1/2-inch height.
Product Details
Product Features
Customer Reviews

Great hay rack, but
By B. Gardner
This is a great hay rack! It works very well for my 3 month old Holland Lop. It's nice if you want a cleaner cage. There are a few small things that bothered me though. I would have liked it better if there was a color selection when buying this product, because I know lots of people have color preferences, with a boy you wouldn't want a purple hay rack. With a girl you would most likely want a girly color. Another thing is when I first got it and had to assemble it, there where hooks on the top that you had to bend to connect them together, so I felt like I was going to break it. Also, there are bigger holes on the bottom part so hay can fall out easier on the bottom. My rabbit is able to rip this off of the wall of his cage very easily, so I wouldn't recommend this for bigger small pets. If your getting this product because of the salt lick, don't bother. My rabbit will love any other salt licks, but he will not even touch this one. Just a few things I would keep in mind when buying this product.

be glad the salt is free since they won't touch it
By S. Thomsen
I ordered several of these for my rabbits. First of all, be glad the salt is free since they won't touch it. Second, the hay either gets stuck and they can't get any out or else the whole bunch comes out with one pull and becomes either litter under the hutch or litter in the potty corner. Just depends on how it goes. I have tried cutting the hay smaller(just seemed to help it become litter faster) and I have tried leaving the top up but that doesn't seem to help with the rabbits being able to get it free from the the feeder. The other issue is that no matter how I clamp the hooks they keep pulling them off the sides of the hutches. Then they whip them around and chew on them. Putting the outside the hutch just results in no hay being eaten. I am replacing them with homemade wire "mangers." I wish I had never purchased them, and I'll give them away as a "bonus" item to the people who purchase my bunnies.

It was a little bit warped when it arrived. I had to bend it back into shape. Also, the lack of a bottom anchor means that I had to modify it by crimping the upper hooks onto the cage and adding a wire anchor at the bottom so that the varmints wouldn't keep knocking it off. These are the reasons I gave 4 stars instead of 5. Also, the salt wheel is pretty useless/unnecessary for rabbits or chinchillas as neither animal needs it.

All that having been said, I'd still buy it again. It works well and is reasonably priced. Our critters chewed through the plastic hay rack that we tried (only took them 1 night). So this is a great improvement. 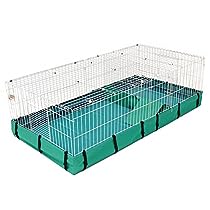 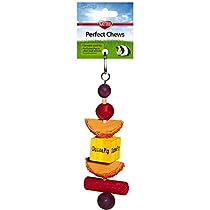