Works for me!
By Terri
We just got the Sentry Calming Collars a few days ago, so the jury is still out exactly how well they work, but I wanted to share how I adapted them for my own use in case it will help someone else.

Background: We have two 12 yr old altered littermates, one male and one female. No real issues with either one, except occasional peeing and pooping outside the litterbox. About 2 weeks ago we added a third kitty, a 3 month old neutered male. The 12 yr olds hate him and are quite stressed out, even with a gradual introduction of the new kitten. In researching strategies for adding a new member to a cat family, I came across calming collars, Feliway diffusers and calming chews.

First tried the Feliway, but because of so many negative reviews regarding it being a fire hazard, I used one reviewer's tip of putting reed fragrance diffuser sticks into the refill bottle and just letting it sit out, rather than using it in the plug-in diffuser. Because it is fragrance free, I have no idea if the cats are aware of it and didn’t really notice any difference. I was hoping for instant success, which didn’t happen. Almost immediately, I decided to order the Sentry Calming Collars. Again, because of so many negative reviews mainly because cats are getting injured while getting their bottom jaw caught on them, I was really interested in the suggestions some of the other reviewers gave on how they adapted the collars to make them safely useable. I do want to note that several years ago one of our cats got her bottom jaw caught on a standard breakaway collar and the same thing happened, it did not break open and she panicked and could have easily been badly hurt if I hadn’t been home at the time to rescue her. I will never again make the mistake of having the collar too loose, thinking one finger width is just too tight. Cats do not really like wearing collars and will do whatever they can to get them off, and they can wriggle those tiny jaws in the smallest gap.

Since the cats now have “bikini” collars – they are a lot like friendship bracelets with a breakaway feature, which I ordered on Amazon - I had to think of an option that would work with these type of thin collars. Here is what I did: I cut a scrap of polyester knit fabric (for strong wear) 4 ½” by 2 3/8”, and made them based on the same method as you’d make an “envelope” pillow cover (you can Google it for step by step). I then hand sewed two snaps on the long open edge, and hand sewed ½” plastic carbone rings on the short ends. The rings may not be necessary, but I already had them on hand and was hoping they would prevent the pouch from twisting. Next I cut a section of the Sentry Calming Collar to fit into the pouch (I can cut 4 equal length sections from one collar), snapped it closed, and then I slid the rings onto the ends of the collar (see pic). I then put the collars on the cats and readjusted the size so they wouldn’t be too tight with the added bulk of the pouch. When I was satisfied with the sizing, I took the collars back off the cats and hand stitched (whip stitch) the pouch to the collar. The breakaway feature is not affected at all, the pouch can easily be unsnapped to replace the section of Sentry Calming Collar and they are nice and soft and don’t irritate the cat as much as a hard collar would. You can see in the pic the collars do get scratched at and a bit snagged, so I will probably have to restitch the pouch to the collar at some of the point - didn't have the right color of an upholstery thread on hand.

But do they work to calm the cats? The first day, after all that work to make two little pouches, they didn’t seem to make one bit of difference. I wasn’t sure if they were just not going to work for my cats or if the fabric acted as a barrier, or if it will just take a while to see any results. The second day they did seem to be slightly more tolerant of the kitten, and today seems to be even a little better. So, no instant change, but I am happy with a little better each day.

As far as the scent, it is very pleasant and not overwhelming at all. Not sure if we got lucky or if other reviewers are super sensitive, but nothing offensive about the smell at all.

Fingers crossed that it just keeps getting better. I also ordered the calming chews, but haven’t gotten them yet. I don’t want to take any chances any one of the cats will become stressed to the point of marking/spraying all over the house.

Update 7-3-2015: I believe the collars are helping relieve the stress of the new kitten in the household. No instant bonding, but a definite differance in the older cats' tolerance toward the kitten, snd no litterbox problems. They will play with him some, I've seen some nose rubbing, and they'll now allow him to eat in his own dish right next to them -- far cry from the pre-collar days. Also, the little pouches I made are working out well and don't seem to bother the cats at all. We did order the calming treats, but they won't eat them (they are very picky about treats). So yes, I would definitely recommend the calming collars with sone type of safety modification -- there are a few besides my own that you can find within the reviews of this product.

Really does work...but safety is a concern
By jtrutter
These collars REALLY do help. Our two male cats have been best friends since we've had them. In December, one of them got outside and encountered a stray cat. When he came back in, he took out his aggression on his brother. It was a violent attack that traumatized us all. We kept them separated and slowly introduced them back to one another over about two weeks. Using these calming collars helped the process. Additionally, our orange tabby has always been timid and scared. This collar changed his personality - he is much more relaxed and very loving now! Both of them are more affectionate now.

A couple of notes - I think you get a good 3 weeks max out of the collar - not a month. Also - there is a noticeable smell (lavendar) but it didn't bother me.

Finally - there are a lot of reviews warning about the danger of the collars getting caught. I was worried about this, so here is what I did. I made a scrunchie type collar with elastic on the inside that I can slip on and that can easily slip off if the cat gets it caught on something. On the inside I cut a small slit and where I inserted two smaller cut sections of the calming collar. The collar comes in a longer length that must be cut to size anyway. This way allows you to use just part of the collar, so I was able to use the rest on the 2nd cat. Two for one, and it eliminates the safety concern. It also might eliminate any rash or skin sensitivety issues the cat might have, since the calming collar is not touching their skin directly this way. I've attached a picture to give you an idea.

Bottom line - These collars are definitely worth it if you have stressed or aggressive cats.

BEWARE!!!! DO NOT BUY!!
By C. Pierson
I came home from work today and found our cat with this collar around the back of her neck and lodged in her throat. I don't know what she did to get it in such a position but there is blood all over my house. I had to cut it off her. These are not break away!! Almost killed my poor cat. Thank God I didn't get stuck overnight at work. She even tore a claw out trying to free herself. I'm going to remove these from my other 2 cars now. NEVER AGAIN!! please look at the pictures of my poor Lily. I feel so horrible for buying these. I wish I had googled these before I bought them. This is a common occurrence!! 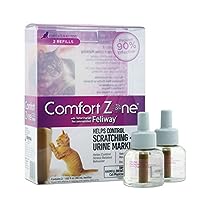